Air plants or Tillandsia are flowering perennial plants that thrive in the absence of soil.

These epiphytic plants can be seen hanging to the branches and trunks of other plants and structures like house and building patio awnings.

The majority are native to countries in Central America, West Indies, and South America.

Many Tillandsias are also growing naturally in the US.

In particular, Florida is home to 15 air plants, which make up about 3% of the overall number of species.

Let’s explore the characteristics of the air plants of Florida.

According to the Florida Plant Atlas, these are the 15 species of air plants native to the Sunshine State.

Colloquially known as the northern needle leaf, this air plant features a bulbous base and long, thin leaves that extend outwards.

It naturally grows on trees in Florida’s wetland areas, but it is categorized as threatened by the state primarily because of habitat damage.

The Tillandsia balbisiana can grow fairly huge, up to 24 inches tall at times, and could turn yellowish-green during its lifetime.

Its leaves are thickly coated with scales that collect nutrients and moisture while reducing water loss.

The plant is most noticeable during the spring-summer season when it is flowering.

However, the growth and evergreen leaves are also evident in other seasons.

It can grow large and features between 10 and 50 flower bracts that bloom.

This variety of air plants may bloom and produce fruit at any time of year, although it is more common during the dry and wet seasons.

This type is called a banded or twisted air plant because of its soft, twisted leaves with oval sheathes.

Depending on the size, it produces a long, thin inflorescence capable of growing a few feet.

The inflorescence produces magenta-colored flowers after it blooms.

Tillandsia flexuosa is a kind of air plant that thrives on a substrate that can’t gather water, such as rocks and tree branches.

It needs excellent lighting without direct sunlight because otherwise, the plant may wither.

Keep it outside in the moderate shade during the summer and indoors in winter.

It’s a natural hybrid of various air plants of Florida, namely the bartramii and fasciculata.

As you might have speculated, the scientific name of this species comes from the state.

It has gray-green leaves with scarlet spikes that grow upward.

Tillandsia floridana may be mounted or potted, making it one of the more versatile air plants in terms of habitat.

The Tillandsia ionantha, or sky plant, is one of the most eye-catching species because of its leaves that form a circular shape.

When the plants grow older, the long, thin foliage will stretch and become wavy while the colors start to be deeper.

A blooming sky plant is its most appealing stage due to the presence of reddish or pink shades on the leaves.

Indirect light should be the setup for sky plants because direct exposure can dry the leaves easily. 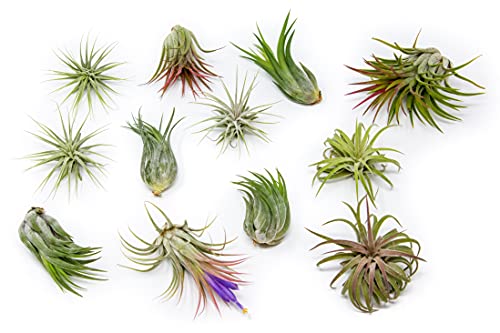 The potbelly air plant is an epiphyte that can be single or clustered with five to 10 recurved, grayish leaves.

These leaves feature trichomes that provide protection from various elements while increasing the plant’s capacity to absorb water and nutrients.

Among its most striking attributes is the abundance of white, fine hair on its leaves.

It develops more slowly than other air plant species while thriving on extra lighting and less water supply.

The pruinosa’s bulb features a striking pink shade in preparation for blooming and then produces exquisite purple flowers.

While its popularity among gardeners and collectors is considered wholesome, the air plant has challenges in the wild.

Due to illegal harvesting, pest damage, and habitat destruction, the state declares the fuzzy-wuzzy to be an endangered plant.

The T. recurvata or ball moss is a small air plant variety that produces long, stiff leaves with brightly-colored bracts.

As it grows, the leaves will curl back until they form a tight spheroid shape.

The overlapping scales that wrap the leaves and steams absorb water whenever moisture is present.

Tillandsia recuvata has a variety of shapes and is frequently mistaken for other species.

Its adaptability to the human environment is probably this air plant’s greatest attribute.

You may see ball moss growing on power lines and other artificial structures.

Also known as the southern needle leaf, it’s a popular flowering air plant that can grow in the wild and residential homes.

The foliage of this epiphyte can exhibit a rich maroon color when it has a rich supply of natural light.

This quality makes it one of the go-to ornamental plants for gardeners and home designers.

The Setacea species are prolific plants that produce a lot of offsets.

It’s also a terrific grabber as this air plant appears to be able to adhere itself to any solid surface without much difficulty.

There aren’t many distinguishing characteristics associated with T. simulata except for two.

One is its half-roundish sheath that can grow up to 20mm wide.

The second is the rose-like colored bracts and violet blooms on its inflorescences, which is probably its most appealing feature.

The Tillandsia usneoides, or Spanish moss, is an air plant with weeping silver leaves that grows from old trees.

Its slender, long stems tie themselves to trees and even fences to establish support.

Besides cosmetic reasons, this air plant has other uses.

Gardeners often use Spanish moss as a mulch to enrich the soil’s nutritional content.

Some used it as a filler for various pieces of furniture in the past.

A few also utilize it to shield the top of hanging plant baskets from various elements.

While it appears to adapt seamlessly to various circumstances, Spanish moss requires high humidity and pollution-free environments to thrive.

The T. utriculata has a couple of common names, including giant air plant, giant wild pine, and spreading air plant.

It’s a huge, stemless epiphyte with a thick bag-like rosette of light green or gray-green colored leaves and pale and appressed lepidote.

This air plant blooms from spring through fall, with a small, curved axis that carries approximately 15 flowers in several bunches.

Compared to other air plants, the giant wild pine can hold more water in its tank or leaf axils.

On some occasions, the T. utriculata can become so massive that it breaks the branch or falls when the bark it is rooted to breaks.

Despite being an evergreen plant, it could exhibit gray-green colors.

However, the flowers’ color can be different depending on light conditions.

Enthusiasts use the T. variabilis as an accent epiphyte for natural landscapes.

While some websites sell soft-leaved wild pine, the Preservation of Native Flora of Florida Act declared it a threatened species.

This air plant is regarded as a native Florida hybrid air plant of densispica x balbisiana and fasciculata.

You can find it naturally growing in the Everglades region.

However, it is possible to find it in locations where the two aforementioned species can coexist.

Its foliage produces long, tapering leaves and a bulbous base in a circular arrangement.

The inflorescence is rather tall, with long, recurving bracts.

It is a well-known air plant because it’s easy to cultivate and can be full of color.

A Good Knowledge of Air Plants Native to Florida

Many people are fond of air plants because of their visual appeal and require less effort to maintain.

Florida is home to many species, making it one of the preferable sources of these ornamental plants.

However, some air plants of Florida are categorized as threatened, which means it’s unethical to harvest the epiphytes under any circumstance.

Get your FREE Patio and Outdoor Guide

0 shares
Special offer for our visitors

Get your Patio & Outdoor Free Guide

We will never send you spam. By signing up for this you agree with our privacy policy and to receive regular updates via email in regards to industry news and promotions